I'd like to introduce Molly to you. But first you need to know a little about Molly's story. She is currently about 7 months old. When Molly was about 4 month old, she had been abandoned. We know this because she was sighted in various places around town. But no one could catch her. This was in early March. There was still quilt a bit of snow on the ground, and it was below freezing every night and probably in the 40's during the days.

Still Molly survived. People caught sight of her as she ate road kill beside the highways. She is very scared of everything. For the last 5 weeks, she has been living with Lori, a foster parent. Lori tells us for the first two weeks, Molly would stay inside her kennel. Molly had been given toys, and at night Molly would sneak out and gather her toys and put them in her kennel, so that became a game to get Molly to come out. Then they took the top off the kennel so she couldn't hide all the time.

Several people came to see Molly. But no one wanted the puppy who would not come play, and who would run away from them. We saw her picture around town, and thought about her. Then decided we would like to see her. She wouldn't come to see us either. But after an hour, we finally picked her up and held her.

But we have Jenny. Jenny is now 14 years old, and we got her when she was a year old for our son Chris. Jenny has her own issues, the biggest is separation anxiety. We brought Jenny in to see Molly. We were told that Molly growls at the neighbor dog, and Lori was not sure what Molly would do. Jenny sniffed at Molly a little, but was more interested in the house (we were in the kitchen!) Molly seemed to be fine with Jenny, and Jenny was good with Molly. ( I guess because neither one was jumping on the other). So we decided to bring Molly home. So here is Molly: 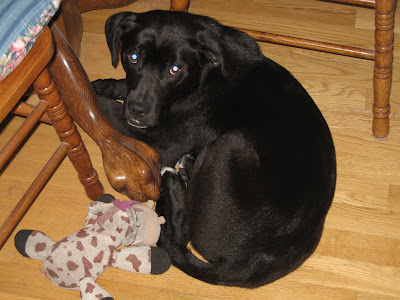 Yes, this is one of Molly's favorite spots, under the kitchen table, between the chairs. She seems to feel safe there. She will now sometimes let us pet her, but is still very afraid. She does not like outside very well, but does better when it is dark. Last night Steve held her and pet her, trying to make her feel safe. As she sat there, I noticed she was watching the TV. As the weatherman reached his hand out to point to areas on the weather map, Molly would shy away. She really was confused when people walked out the side of the TV and disappeared! She finally gave up on the TV, and went to sleep in Steve's lap.

She had another trauma today as she NEEDED a bath. She now smells good, and got a greenie tooth cleaning bone as a reward for being so good in the tub. (Mom only got half soaked.) She seems to watch Jenny and take cues from her as to what is good and what is not. So far the two dogs have been fine together.

I'll keep you updated on Molly's progress as we go along.


So here is the finished Horse Quilt. The top three water lines were done with a white glittery thread. I also used that thread to outline the horse. The bottom two water lines (one is in the darker blue water) is a verigated blue that is a little glittery. I was very pleased with how this turned out, and so was my secret sister! We had our gift sharing at a resturant, and the tables on either side of us wanted to see the quilt also. I'm glad it turned out so well. 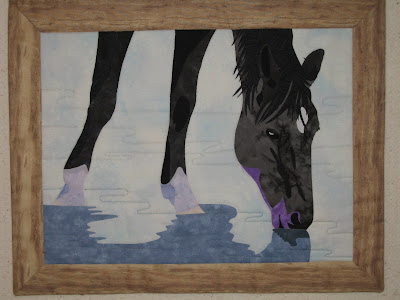 And a final picture of my String X flimsy for my charity quilt group. It is 6 blocks by 6 blocks. For you non-quilters, a flimsy is the quilt top, before it is layered. This is now at church, waiting to be layered next week. 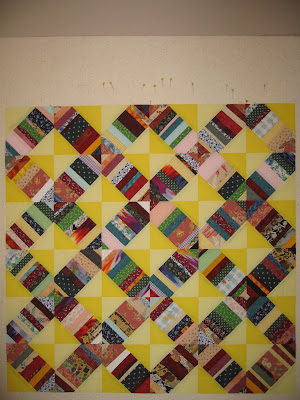 Molly looks like she needs a lot of loving. Is she a lab? How long have you had her now? Jenny will teach her the good stuff. Love you - Mom -the horse turned out so very good and so did the quilt.