Just want to share a couple of pictures of Molly. She is making great strides in being a puppy. He is a pic of Molly and Jenny. The two of them were being silly as I came into the house from church. There were moving around so fast that I only got this one good picture of the two of them. Note that Molly's tail is UP! Finally! Every so often she forgets that she is scared of everything thing, and acts like a puppy. They I reach out to pet her, and she shy's away. 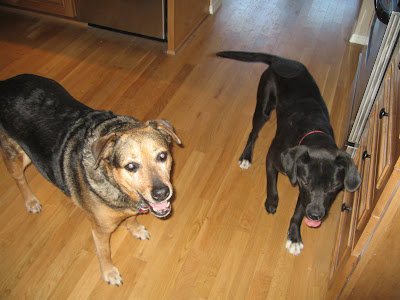 Tonight, Molly managed to crawl under the lower rungs of the chair. She really does feel safer when she is under stuff. It was funny tho that her behind was sticking out the other side. Hubby went over and pet her - once in a while we can get a chance to love her. 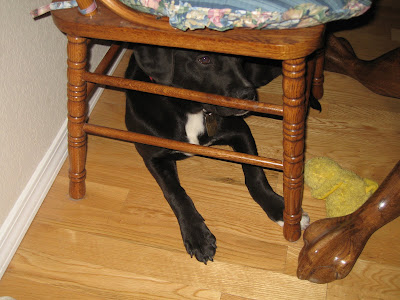 Oh, and puppy stuff... she picked up the kleenix box and I caught her carrying it across the room. Later I heard a "funny" noise... she had hubby's shoe and was just starting to chew on it. No damage, and it was his old shoes for painting, etc. And a pair of socks were in the same area. And just a little while ago, I caught her trying to pick up the paper scissors off the coffee table. (Not my sewing scissors!) Why these were interesting, I don't know. She is so gentle when she picks things up. I can just look at her and say "NO Molly" in a firm voice, and she stops what she is doing. She always acts so surprised that I catch her. She is really smart, and is learning to "talk" from Jenny.
Posted by Vicki at 11:27 PM